Background: On October 19, 2018, country duo Hengistbury put out their brand new single “Shooter on the Mound” and debut album “Add Another Minute.” Jessie and Pete, recorded in their small studio on the Dorset coast and they investigated deep into the collection of different instruments that was available to them to make a sound that is truly their own. They became a duo in November 2017, and their first single “What Folks Don’t Know,” came out in 2018. “Shooter on the Mound and their new full length album “Add Another Minute,” is available worldwide from all big digital music platforms and physical copies can also be purchased from their website. 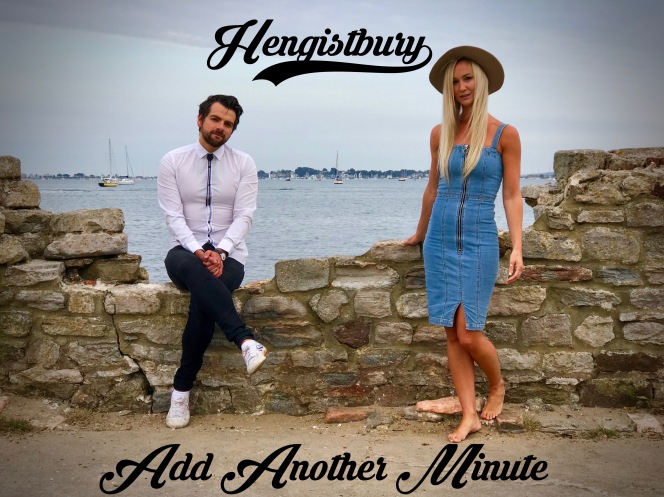 1.    Hi Jessie and Pete how have you grown as country music duo in 2018?
It’s been a really big year for us. In January, we’d written a couple of songs and started the recording process but hadn’t really ventured out as a duo to play live and now as the year draws to a close, we’ve launched two singles and an album and really come into our own live.
The biggest thing for us has been finding our identity and really landing on who we are which has in turn defined the character of not only our album but also everything else we’ve done so we’re at a really exciting point in our career.
2.    How did you come up with the name of your guys’ new album “Add Another Minute?”
We wanted to name the album after one of the lines from one of the songs. We tend to write about things that have happened to us or things we have witnessed first hand and so it felt appropriate to name the album after one of those lines.
We zeroed in on ‘Add Another Minute’ because we felt that it reflected the manner in which the album was created. Technology has had such an impact on music consumption over the past few years that there’s a growing trend of music experienced via playlists and even the emergence of listening habits that involve listening only to the first half of a song before skipping to the next on a playlist. Perhaps counter-intuitively, we built this record as a full album and we hope our listeners will take a little extra time to experience the full arc of the record as well as just the singles and so ‘Add Another Minute’ felt like a good summary of that ethos.
3.    What is the background story behind your latest single “Shooter on the Mound?”
Shooter on the Mound focusses on the unspoken part of relationships. People are complex and deep and while you can have 100% clarity of your own feelings, it’s the unmapped enchanted forest that is another person’s feelings that can be so exciting, confusing, stressful, or upsetting and it’s that gap that we wanted to address in the song.
4.    Is there something you wish your fans would take away from your new album?
The album is primarily there to be enjoyed. We’ve tried to take things that have happened in our own world and break them down into themes that we hope will resonate and if that strikes a deeper chord with some people then that’s great!
5.    Was there any other artists or producers that helped on your guys’ new album?
No! We did this record completely on our own in a tiny room in Pete’s flat that we converted into a studio. Pete’s dog kept interrupting the sessions looking for attention so it’s possible that she’s on the final cut somewhere!
For our debut, we really wanted the record to reflect us and so we decided to take complete control of it. It was a steep learning curve to understand the recording process in such detail but we got there in the end and we’re happy with the feel of the record.
6.    Is there anything else coming up with your music for the rest of 2018?
2018 is now all about promoting the album and playing live as much as possible! We’ve got some really great gigs coming up with some amazing artists, so check our website for details!
7.    Is there anything else you would like to share?
Well, firstly, thanks so much for having us on the blog again! It’s such a cool website and we really enjoy being a part of it!

Our album can be streamed here:
Spotify – https://open.spotify.com/album/6vEFrPusLxvCP8TJy7kUIS
Apple Music – http://itunes.apple.com/album/id/1435918198
If physical CDs are your thing, then they are for sale here:
www.hengistburymusic.com/store