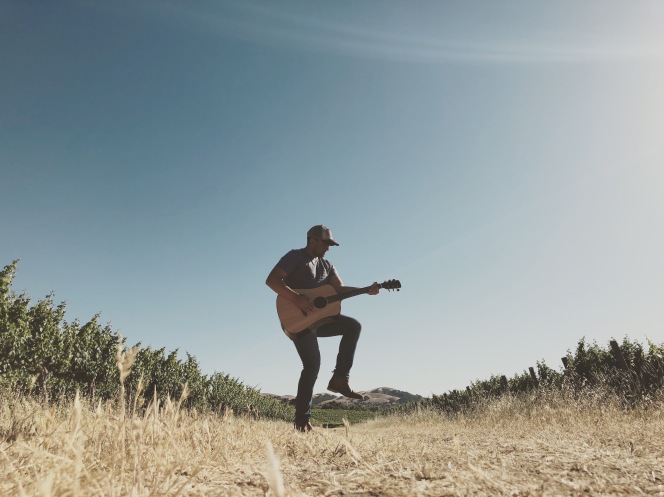 I feel that with the release of my new album, California Country, I’ve grown as an artist by continuing to build my repertoire of music. Over the years, I’ve released numerous albums with different bands (rock, punk, you name it!). It’s such a great feeling to have spent the last few years now working on a country album and being able to release and perform it live.

2.    How did you come up with the name of your new album “California Country?”

Back in 2012, I started writing a song about Stagecoach, which is a country music festival in California. At the time, the song was called “Stagecoach Crowd”. The song evolved over (well, 6 years) of writing it and I eventually called it California Country. To me though, it’s not just the name of a song, but also a lifestyle In a way, it is also a music genre of it’s own.

3.    What is your favorite song from your new album?

That’s tough to say! I really enjoy performing Home Team, High Top Chucks and Springtime Sun, but I also believe Wide Awake Dreaming has the most dynamic to it making it a very powerful song. My favorite changes every day! Today, I’d have to say it’s Wide Awake Dreaming… or maybe Losing 🙂

4.    Is there something you wish your fans would take away from this song?

Wide Awake Dreaming is about taking on an adventure with someone you love. It’s about working hard through sleepless nights and long days while you work toward a greater goal. I hope it can help inspire people to not only dream, but to be wide awake while they do it. I’m a believe that good things don’t come to people who wait, but people who work hard every day for what they are seeking.

5.    Was there any other artists/producers that helped to create your new album?

Doug Allen produced the majority of this album with me. He has had the biggest impact in being able to get this album created and I can’t thank him enough. He not only produced and engineered all of the recording process, but also performed alot of lead guitar and vocals throughout the album with me. Jake Pooser, John McConaghy were also there every step of the way. I also have to credit Norv Turner, my brother Adam, Kyle Castellanni, Dusty Boyle, Jonny Williams, Kevin Childs and Jake Antelis for supporting on various songs along the way.

My plan now is to continue to promote the album as much as possible, hopefully land a song or two on any radio outlets and also play shows. I am in the process of getting the band together to be able to play full shows. We’ve started already with a string of acoustic sets through San Diego and Nashville and are going to continue to try and get this album out there however we can.

My biggest request is to simply check listen to the album! It’s available on Spotify, Apple, etc. and I appreciate you adding it to your playlists and sharing with your social networks! My Instagram and Twitter is @StephenRayMusic. Thank you!